On 17 May 2018, World Museum Day, and in keeping with its innovative approach to programme delivery, the One City One Book project took its next definitive step towards elevating the written word to the fine arts.  The Durban City Hall Art Gallery played host to the very first depiction of the written word in paint.  25 Fine Arts students of eThekwini College were honoured with their paintings adorning Gallery 4 with an exhibition that is to be on display for the next five weeks.  These 25 original pieces were inspired by Dr BP Singh’s novel, When The Chalk Is Down – An Odyssey.

The team responsible for the launch were very motivated by the turn-out of well-wishers, as well as by the combined enthusiasm and appreciation of the artists for the acknowledgement of their work by the eThekwini Municipality.  One of the artists-in-attendance had come in from as far as Pongola, reflecting exactly how important this initiative is for budding artists who have thus been introduced to the world through such an acknowledgement.

Ms Tebogo Mzizi, Senior Manager: eThekwini Library & Heritage Services, articulated her happiness at the success of such a bold initiative by her department and the municipality.  She went to great lengths to indicate the combined appreciation to the artists, eThekwini College Fine Arts Department, her team leads of Mr Thevan Harry (Education Officer) and Mr Thulani Makhaye (Curator), for the excellent work done with such innovation, which provided impetus to the Municipality’s being chosen as the UNESCO City of Literature for 2018.

“I am touched by the fact that we have provided a platform for these 25 proudly South African artists, hailing from our municipality.  Our acknowledgement of their original pieces will be truly realised when their work takes centre stage on the global arena, and for posterity,” he said.  “I must also laud Dr Singh for the nature and content of his novel, more so since it has been a catalyst to these artists, as well as to the next level of added value to the One City One Book project.  It is our intention to continue to evolve in like manner. ”

Dr Singh’s indicated that he was humbled and touched that his work had been acknowledged in such a manner.  “There have been a number of firsts attributed to this piece (the novel), and the fact that I have been able to, albeit in a small way, contribute towards exposing the world to our South African talent, is invaluable to me.  Their journeys have just begun.” 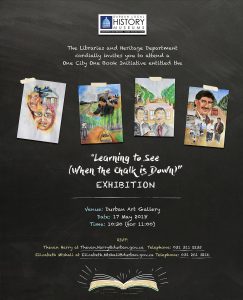