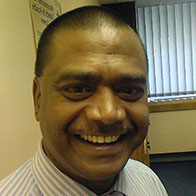 From a ‘character’s personal perspective’ – looking in…………

Hi, I’m Elvis, one of the seemingly colourful characters in ‘When the Chalk is Down’. BP and I go back almost 20 years, having shared the same friends and foe, whilst teaching as level 1 educators at the Foresthaven Secondary School.

When I read BPs ‘When the Chalk is Down’, for the first time, tears actually welled up in my eyes. I didn’t expect a big man like me to cry again, but cry I did.  I was particularly overwhelmed by the vivid descriptions of events that I shared with BP, both in his personal life, as well as a fellow educator at the Foresthaven Secondary school.

I never imagined myself as a character in any book but BP has now immortalized me as well as the many other ‘unsung teacher heroes’ of Foresthaven Secondary School.  I say ‘unsung teacher heroes’ because I truly believe that some of us, who were there at the time of BPs story didn’t actually realize how much our small but effective rebellions contributed to the real transformation in that school as well the communities that it served. When I reminisce about the early 90s in particular, and I picture once again the vibrant workforce at that school, I once again relive every single day of debate and discussion that ensued, particularly those that took place in the staff-room.

It was a time when the ANC was un-banned and was destined to become the ruling party of the day. It was a momentous period when our ‘father of the nation’, Nelson Mandela, was finally released from prison, after being incarcerated on Robin Island for 27 years, for his leadership role in the fight to free South Africa from the shackles of Apartheid. It was also a volatile time when our Comrade Chris Hani was brutally assassinated by Afrikaner right wing forces, and a time when you could literally sense the deep anger of the masses to crush Apartheid once and for all. This was evident in the many, often violent, protest marches and political rallies that took place in all major city centres, including Durban. It was also an exciting time of CODESA, where ‘negotiations’ replaced ‘violent revolution’, when our Democratic Constitution was finally drawn up, when human suffrage was  ultimately declared and activists, like BP and myself, were busy preparing our communities for the 1st  national democratic elections in South Africa. It was the dawn of a new political era. And for all progressive teachers, like us, it was finally a time to break the chains of Apartheid education and usher in a new paradigm of equal, non-sexist, non-racial and democratic education system for all learners in the country.

BP, a young and energetic teacher of English at the time, was noted for his quick wit and humour and often played the role of mediator and arbitrator whenever hot –headed comrades like myself and Govi got into scrapes with the intransigent management of the school, including the SMT (School Management Team), education officials from the soon to become defunct Indian House of Delegates, as well as the Foresthaven School Governing Body. Many anecdotes in BPs book relate to how regular conflict between opposing forces at the school arose and to how they became serious issues to contend with.

From the title of the book any reader would expect that no teaching and learning could ever take place ‘when the chalk is down.’ Ironically, and relatively speaking, the greatest amount of valuable, effective and efficient teaching, learning and transformation did take place, especially when one considers the fact that we took the initiative and opportunity to literally ‘force open the doors of learning’ for the first time in South African history, to the previously disadvantaged black learners from Kwa Mashu, Inanda and other neighbouring African districts.

Foresthaven Secondary was never going to be same again. Phoenix was never going to be the same again. We were committed to transformation and change, ‘come hell or high water’ and stood firm against forces from within the ex House of Delegates Education Department as well as from within the ‘Indian’ Phoenix community that threatened us with violence, charges of misconduct and even job-suspension.

For the first time teachers from Foresthaven Secondary mobilized the teaching force in the Phoenix community under the banner of the South African Democratic Teachers Union (SADTU), to take on the social and political struggles of the day.  It was therefore not surprising that many of the teachers from this school become union leaders at site, branch and regional levels of SADTU, during the 80s and 90s , the time period that that BP talks about in ‘When the chalk is Down!’

BPs book relates some of the many real- life experiences both in and out of the classroom. ‘Aluta Continua!’ (The Struggle Continues) and ‘Amandla Awethu!’ (Power to the People) became some of the freedom slogans of the day. Many of us were prepared to make real sacrifices for educational transformation. In all our ‘sit ins’, demonstrations and protests we were one, united, powerful force to reckon with. BP through his narration, wit and humour reminds us once again of those struggling but rewarding times.

Viva! ‘When the Chalk is Down’ Viva!

There is another more important side to his book, one that relates the sad but true story of his family, struggling through a painful and often ‘hand to mouth’ existence as second class ‘Indian’ citizens, living ‘cheek by jowl’ in the small, crowded location of Buffelsdale in Tongaat, on the North Coast of Durban.

BP never fails to be frank and open about how badly ‘poverty stricken’ families in this town faced the onslaught from not only the apartheid puppet Tongaat Town Board but also by some of the unscrupulous civic leaders who claimed to champion  the rights of the ‘down trodden’ but who only made empty promises of ‘home ownership’ to them.

I know, I was there, at the time, when the plight of BPs parents was highlighted to both arrogant Town Board officials as well as ineffective local civic leaders. It was clear to me then that there was no one there to really help these helpless victims of apartheid.

Civic leaders, who stood on open platforms, vowing to give people like BPs parents the permanent rights of ownership to their small rented semi-detached living quarters, finally ditched them in the time of need. Many of these charlatans jumped on the bandwagon of ‘freedom fighters’ but sought nothing but personal reward from the new Democratic South Africa. Only the old folk like the Singh’s, if they were alive today, would  be able to tell how much they had been ‘taken for a ride’ by the many empty promises made.

I believe this book highlights the plight of those who like the Singh’s never got to see any ‘light at the end of the tunnel’. For most of them, life was a struggle, a struggle to claim a God given right to their own homes. To this end the Singhs, like their neighbours, fought relentlessly, in their own way, against the Apartheid Regime. Many had not made it to live to see their dream come true.

In the final analysis I see ‘When the Chalk is Down!’ as a brilliant piece of mosaic, piecing together different episodes of struggle in the life of the writer. I find it heart-warming to find myself displayed, as one of the small pieces, in this incredible work of art. Well done B.P.

Long live ‘When the Chalk is Down’ long live!