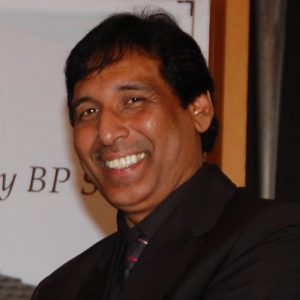 Dr Bhoowan Prakash Singh (BP) was born and raised in Tongaat, a town on the North Coast of eThekwini, KwaZulu-Natal.  He is the youngest of seven children, with five sisters and a brother.  Born into a family categorised as ‘economically disadvantaged,’ BP’s family was amongst the first two that moved into the sub-economic (low cost) rental houses in Buffelsdale, Tongaat, which later on incorporated the suburbs of Flamingo Heights, Chelmsford Heights, Watsonia and Belvedere.

BP matriculated at Buffelsdale Secondary and subsequently went on to study for a Junior Secondary Education Diploma (Springfield College of Education), a Bachelor of Arts and a Honours Bachelor of Arts (UNISA), a Master of Business Administration (with Buckinghamshire Chilterns University College in the UK via MANCOSA), and a Doctorate in Public Administration (UKZN).

BP’s career spans fifteen years as an educator, ranging in experience from Level 1 to Level 4.  He served as a L1 educator at the School of Industries for Girls:Newcastle (1895-1986) and at Foresthaven Secondary in Phoenix (1987-1997).  he then served at Mzingezwi Secondary in Ndwedwe as a Deputy Principal in the capacity of Acting Principal (1997-1999) and subsequently at Havenpark Secondary in Phoenix as Deputy Principal (1999-2000).  BP then served at the North Durban Regional Examinations Services as Acting Deputy Chief Education Specialist (2000-2003) and then at the Pinetown District Examinations and Assessment Services Component as a Deputy Chief Education Specialist (2004-2005).  He then transferred to the KZN Department of  Sport and Recreation (KZNDSR) as a Deputy Manager for Communication (2005-2015), and now continues to serve the KZNDSR as the Deputy Manager for  Policy, Planning, Strategy & Research.

Engaging in activism has become a trademark of BP, with many years of his life being spent in the civic and union environment. He served as the General Secretary for the Verulam Ratepayers’ Association and the Combined Civic Association of Verulam, as well as served as the first Chairperson of SANCO:Verulam.  BP also served as a union activist within SADTU, thus experiencing the volatile yet exciting period of transformation in South Africa.  Whilst championing the cause of his parents’ housing battle, especially during the time of political transformation in the country, his contribution to educational and social transformation displays the synergy between personal and professional life.

BP is married to Irene and has three daughters – Shivani, Sheromi and Sayuri.  He currently lives in Verulam, KwaZulu-Natal.  He places tremendous value on family and friendship, and both are openly acknowledged in this book for the formative role they have played in this life.  His message to his readers is simple:  Legacy Matters!