The promotion of literacy and the arts is a critical mandate of the eThekwini Municipality, delivered through the Parks, Recreation and Culture Unit.  In this stead, ingrained in the belief that a literate society is a more empowered society, the eThekwini Municipality Library & Heritage component has initiated a project titled ‘One City One Book’.

The intention of the ‘One City One Book’ project is also intended to promote South African literary works in general, and KZN literary works in particular.  The following is a history of the project since its inception in 2013:

The Municipality is proud to announce that the 2016-17 ‘One City One Book’ choice is When The Chalk Is Down, authored by Durban-born Bhoowan Prakash Singh. The book is written on the plight of the people of colour during the apartheid era.   It is a rich narrative of his experience as an educator and his struggle with the Tongaat Town Board and later the eThekwini Municipality over the transfer of the title deed to his parents’ house.  The book touches on issues such as education, housing and service delivery, as well as authority and responsibility. Singh’s book resonates with social issues that are pertinent to the broader society today, based within the KZN context, without compromising on the experience of a good read for both adults and children alike.

Against the backdrop of the above, the project shall be launched on Wednesday, 28 September 2016, at the Umnini Hall (Thusong Centre) along the City’s South Coast. The eThekwini ‘One City One Book’ programme will be taken around the City, through the various conduits of the Municipality.

The project launch of eThekwini Municipality’s ‘One City One Book’ programme, held on Wednesday, 28 September 2016, at the Umnini Hall (Thusong Centre) along the City’s South Coast, was a tremendous success.  When The Chalk Is Down, the 2016-17 novel by Dr Bhoowan Prakash Singh, was well received by a full-house of more than 350 attendees comprising members of the public, learners, educators, government officials and political representatives, as well as civil society representatives.

The format of the launch incorporated the first session with a brief presentation by the author, followed by a reading of some excerpts by learners on the following three areas, Education is a Societal Responsibility;  Service Delivery and Authority and Responsibility.  The discussion session then proceeded with a conversation between the facilitator and five panellists comprising the following:  Mr Nhlanhla Ngubane (business and educational leader); Ms Khanyi Dubazana (ELITS Director, KZNDOE); Dr Bhoowan Prakash Singh (author); Mr Siva Naidoo (civic and political activist) and Dr Mogie Subban (UKZN lecturer in Public Administration – College of Law & Management Studies).  This session concluded with a healthy interaction with the audience.

The second session incorporated a quiz contest hosted by the ever-popular Miss eThekwini Nompumelelo aka Lelo, who had the audience wholly engaged via a vibrant quiz.  The six celebrity participants, including Naymaps from Uzalo were quizzed on the first five chapters of the book. The knock-out session was enjoyed with the whole-hearted participation of the learners in the audience.

The promotion of literacy and the arts is a critical mandate of the eThekwini Municipality.  This message was delivered by Mr Thembinkosi Ngcobo, Head of Parks, Recreation and Culture Unit.  This programme is based on eThekwini’s ingrained belief that a literate society is an empowered society.

The eThekwini ‘One City One Book’ programme will be taken around the City, through the various conduits of the Municipality.  “The choice of When The Chalk Is Down is a clear indication of the maturity of our democracy, as well as the emphasis of government on public participation in decision-making, as well as promotion of an active citizenry.” said Dr Singh. Please visit the gallery page for more photographs or visit the media page for articles published..

Four of the more than 100 learner attendees read  extracts from the book, setting the tone for the themes of education,service delivery and authority & responsibility that formed the core focus of the discussion. 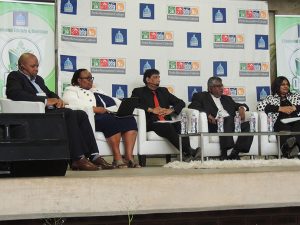